We are extremely proud of the numerous awards and accolades that we have achieved throughout the years.

The UK National Ice Cream competitions have been run by industry trade body; 'The Ice Cream Alliance' since the 1940s and are steeped in history and tradition. Since we first started entering in the 1970s we have won diplomas, diplomas of merit and special diplomas of merit, with our first major success coming in the 1992 competitions, when we won the special flavour class for our toffee crunch entry.

2006 saw the beginning of a tremendous run of success in the vanilla classes. By winning both dairy vanilla titles in that year, we became the first company ever to win the much coveted 'double'. Since then, we have scooped another 5 first prizes for our Vanilla Ice Cream in the National Awards with the crowning glory coming in 2011/12, when we were awarded the title of 'Vanilla Champion of Champions', the first company in Ireland ever to do so.

The timing of this prestigious title couldn't have been better as it coincided with our 'Cento Anni' celebrations, a series of events that were held to mark our 100th year in business. In the most recent renewal of the competitions, held in February 2013 at Harrogate, we repeated our success of 2006 by winning both dairy vanilla cups and securing a historic second 'double'. 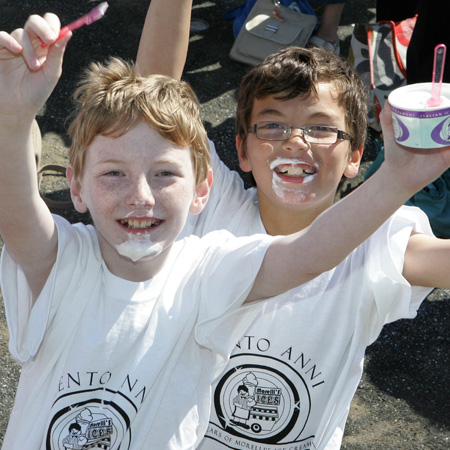 To celebrate our centenary year we hosted a whole range of events including a photographic exhibition and a charity ball, but the highlight of the year was our Guinness World Record attempt.

We achieved this on Saturday 23rd July 2011 by breaking the then current record for the 'longest chain of people licking ice cream at the same time'. The record had been set in April 2010 by Augustana College, Rock Island, Illinois, USA with 2,694 people completing the chain. We broke that record by just 34 people to create the new Guinness World Record. We were presented with our official certificate in September 2011. It remains a great memory for all the family and we were very thankful for the sunshine on the day.

Two Gold Stars for our Cherry with Cherry Variegato

One Gold Star for our Pralines & Cream

One Gold Star for our Irish Black Butter

Two Gold Stars for our Frozen Yoghurt with Cherry

One Gold Star for our Caramelised Hazelnut Ice Cream

One Gold Star for our Chocolate Caramel Gold Ice Cream

One Gold Star for our Frozen Yoghurt with Cherry

One Gold Star for our Caramelised Hazelnut

One Gold Star for our Coffee

One Gold Star for our Sea Salty Caramel

One Gold Star for our Rhubarb & Custard

​One Gold Star for our Double Cream Vanilla

​One Gold Star for our Very Berry Cheesecake